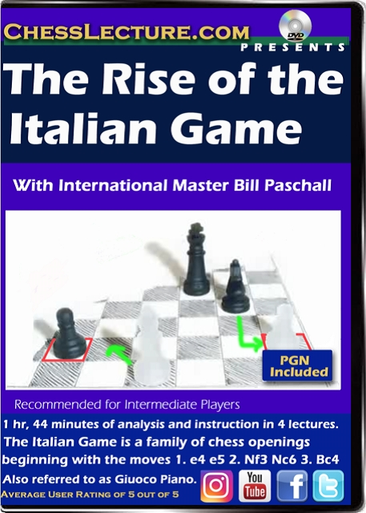 The Italian Game is a family of chess openings beginning with the moves:

Part of the large family of Open Games or Double King's Pawn Games the Italian game is one of the oldest recorded chess openings. Here Bill shows us examples of how it is rising again in popularity and used effectively in modern grandmaster games.

Content: 1 hours and 44 minutes of instruction and analysis in a series of 4 lectures.

Members of ChessLecture.com rated this series a  5 out of 5

IM Bill Paschall currently resides in Budapest, Hungary. Bill was the Boylston Chess Club Champion 2002, finished 1st at the Foxwoods Open 2002, Three-Time New England Open Champion, and has defeated more than 20 IGM's in tournament play. Bill has extensive experience training both adults and children privately and in the schools.

ChessLecture.com has over 3350 videos and is the worlds largest chess video library.

Come see our new free video of the week.