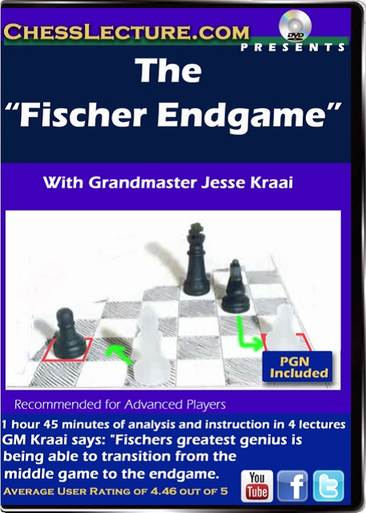 GM Bobby Fischer and the 11th world chess champion was known for excellent endgame technique. IM Jerey Silman listed Fischer as one of the five best endgame players along with Lasker, Rubinstein, Capablanca and Smyslov.  Silman called Fischer a "master of bishop endings".

In this DVD Jesse shows us examples of the endgame he is so well known for. The endgame consists of a rook, bishop and pawns against a rook, knight and pawns and has sometimes been called the "Fischer Endgame". Named because of three instructive wins by Fischer (with the bishop) in 1970 and 1971 over Mark Taimanov One of the games the 1970 Interzonal the other two were in their 1971 quarter-final candidates match.

Members of ChessLecture.com rated this series a 4.46 out of 5

Fans on Chesslecture.com said: I think this is one of the greatest chess endings! Thanks GM Jesse Kraai to put it on the lab! It is beautiful endgame and practical! In my opinion you deserve 5/5 Congratulations!

GM Jesse Kraai: currently resides in Berkeley, California. His most notable chess achievements are winning the Denker Tournament of High School Champions in 1989 and 1990, and competing in the US championship from 2002-2006. Jesse received his final GM norm at the Foxwoods Open 2007 and has a Ph.D in Philosophy from the University of Heidelberg. Jesse is an active chess coach.

ChessLecture.com Opened in 2005, ChessLecture is the worlds largest video archive of Chess Instructional videos. With more then 2500 videos, our members can research topics on chess to their hearts content. 5 new videos added weekly by our top not proven masters and educators.