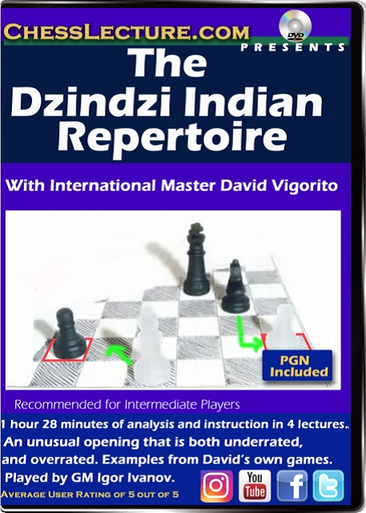 The Dzindzi Indian is named after the grandmaster and two-time US Champion Roman Dzindzichashvili. It is said it looks like a strange cocktail of the Benoni, Dutch and Nimzo-Indian!

The key to the Dzinzi is that Black gives up the prized dark square bishop to weaken Whites pawn structure. Black's decision to capture on c3 unbalances the position in a way he couldn't hope to do otherwise, and for this reason the Dzindzi-Indian is an effective line to play as Black if you are desperate to win. A practical advantage from Black's point of view is that quiet responses by White tend to be at best unchallenging and sometime much worse than that, so the Dzindzi-Indian can be a successful choice against timid players.

David shows us different game progressions and shows us how to use the Dzindzi to our advantage.

Content: 1 hour and 28 minutes of instruction and analysis in a series of 4 lectures.

IM David Vigorito is the 2007 Massachusetts Champion and has been the state champion of New Hampshire and Nevada. USCF rated at 2479, David was the Champion of the Boylston (Boston) Chess Club. He played in the 2006 U.S. Championship after finishing in a tie for 3rd place at the U.S. Open in Phoenix. David is a successful chess author - his Challenging the Nimzo-Indian is very well received by critics and players alike.

Founded in 2005 ChessLecture.com is the largest professional quality chess instructional video library in the world. Our lectures are created and presented by Grand Masters, International Masters and Life Masters and contain excellent instruction by experienced player educators for the chess enthusiast.