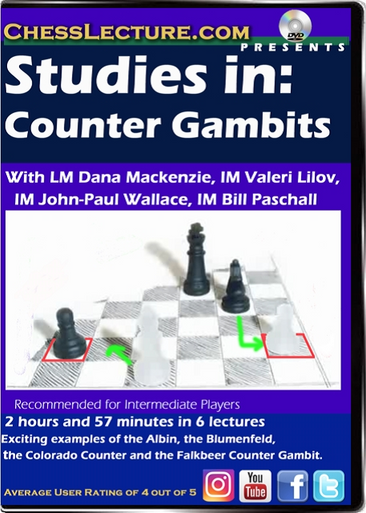 by The Masters of ChessLecture

Content: 2 hours and 57 minutes of instruction and analysis in a series of 6 lectures.

Exciting examples of The Albin, The Blumenfeld, The Colorado Counter, The Falkbeer counter gambit.

Learn how to keep your opponent from gaining an advantage.

Fans on Chesslecture.com said: “ABSOLUTELY FANTASTIC demonstration of the Benko's counterpart by IM Wallace”! “Will definitely remember & use these ideas in my own games... thanks”!! “Amazing game with a superb lecture”. “Thanks for the consistently great lectures”!

ChessLecture.com Opened in 2005, ChessLecture is the world's largest video archive of Chess Instructional videos. With more than 3500 videos, our members can research topics on chess to their hearts content. 5 new videos added weekly by our top not proven masters and educators.