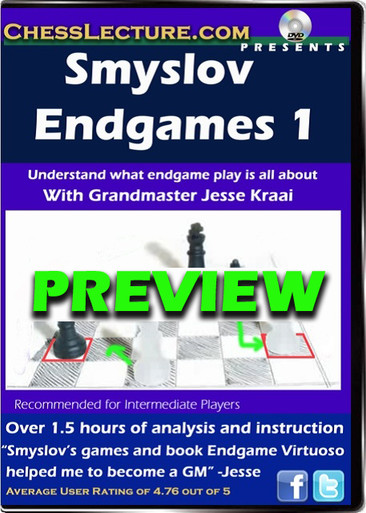 GM Jesse Kraai reviews Vassily Smyslov, one of his favorite players of all time. Jesse claims studying Smyslov’s endgames helped him to become a Grandmaster.

Members of ChessLecture.com rated this series a 4.76 out of 5

Fans on Chesslecture.com said: Wow, this was a GREAT game and your explanations were very clear and concise. I look forward to watching the rest of this series. 5 stars.

GM Jesse Kraai: currently resides in Berkeley, California. His most notable chess achievements are winning the Denker Tournament of High School Champions in 1989 and 1990, and competing in the US championship from 2002-2006. Jesse received his final GM norm at the Foxwoods Open 2007 and has a Ph.D in Philosophy from the University of Heidelberg. Jesse is an active chess coach.

Five lectures professionally mastered by the publisher/ New in Box and just released!