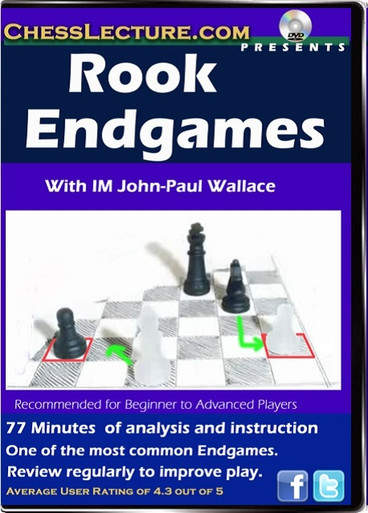 Recommended for Intermediate and Advanced Players

Rook endings are the most common endgame in chess. Endings with rooks and pawns occur in 8 to 10 percent of all games. This series teaches essential knowledge, without which you are helpless in these very common situations. You will learn how to play the Lucena position and how to execute the Philidor defense, as well as other variations you need to know.

Content: 126 minutes of instruction and analysis in a series of 4 lectures.

Members of ChessLecture.com rated this series a 4.4 out of 5 ECO N/A

Fans on Chesslecture.com said: Very useful. I especially like that you cover a number of alternatives that each side can try if they want to play moves other than the most common/main line ones - those are the moves stronger opponents try on me, but now I know how to deal with them!

Four lectures professionally mastered by the publisher/ New in Box and just released!