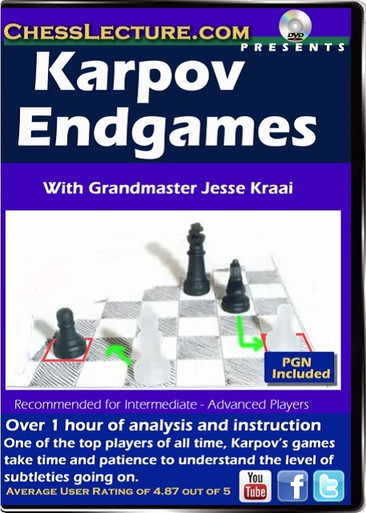 Anatoly Karpov was the 12th world champion and is considered by many to be one of the greatest players of all time. His tournament successes include over 160 first-place finishes. He had a peak Elo rating of 2780, and his 90 total months at world number one is second all-all time just behind Garry Kasparov. Karpov’s legendary endgame technique has always been something of an enigma.

Here GM Kraai takes you through a series of Karpov’s endgames to show the subtle complexities going on.

Content: 68 minutes of instruction and analysis in a series of 3 lectures.

Members of ChessLecture.com rated this series a 4.87 out of 5

Fans on Chesslecture.com said: Fantastic lecture. I hope we get a lot more Karpov games. I'm glad to see someone speak out against the silly term "technique". Winning a positionally won game requires lots of tactics and ideas, not the implied machine-like boring play. - FM Eric Peterson

GM Jesse Kraai resides in Berkeley, California. His most notable chess achievements are winning the Denker Tournament of High School Champions in 1989 and 1990, and competing in the US championship from 2002-2006. Jesse received his final GM norm at the Foxwoods Open 2007 and has a Ph.D in Philosophy from the University of Heidelberg. Jesse is an active chess coach and recently released his first book “Lisa, a Chess Novel”.

3 Lectures on DVD NEW in box and Just released!