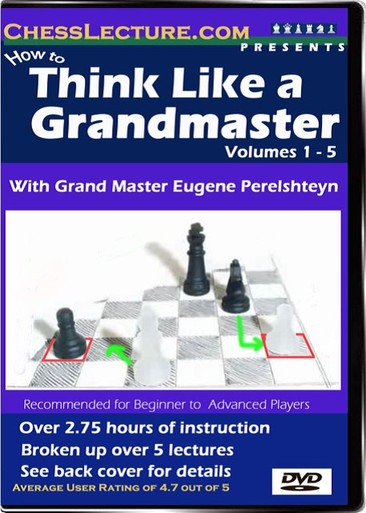 International Grandmaster Eugene Perelshtyen explains the thought process behind key games in his career by answering the questions “What particular ideas or thoughts are running through your mind”? And “How do you make the best move in the given position”? Eugene’s practical advice is geared to aspiring chess players..

Content: 2.7 hours of chess theory and discussion, with example games, over a series of 5 lectures.

Members of ChessLecture.com rated this series a 4.7 out of 5

Fans on ChessLecture.com said: Excellent! Superb lecture!! Awesome lecture. I play the KID myself. I put this lecture to great use several days ago. Got myself a comfortable win in this line.

GM Eugene Perelshtyen earned his third GM norm after sharing first place in the 2006 Foxwoods Open, giving him the official GM title. He won the Samford Chess Fellowship in 2002, an award that amounts to $64,000, which is awarded to the top American player under 25 years old. Eugene also led the University of Maryland, Baltimore County to several Pan American championships from 1998-2002. Eugene also won the highly prestigious US Junior Championship in 2000. Eugene recently co-authored the books Chess Openings for Black, Explained and Chess Openings for White, Explained.