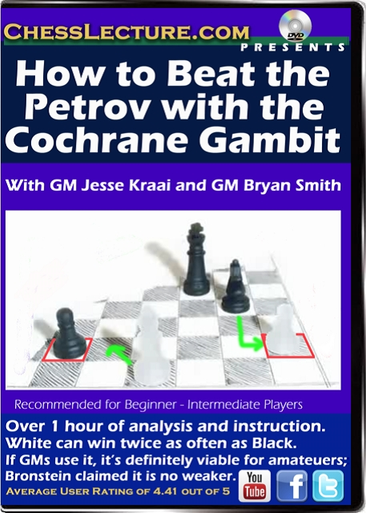 Content: 1 hour and 7 minutes of instruction and analysis in a series of 3 lectures.

John Cochrane was a strong nineteenth century Scottish chess master ranked only below the well-known Howard Staunton the designer of modern chess pieces. Cochrane was known name in the Calcutta chess club as he played there while he lived in India. The first appearance of the Cochrane gambit against the Petrov's defense was in 1848 against an Indian master Mohishunder Bannerjee.  See also Petroff

Here Jesse and Bryan show you how to use the Cochrane effectively to smash the Petrov.

Members of ChessLecture.com rated this series a4.4 out of 5    ECO E42

Fans on Chesslecture.com said: Fantastic game. With this gambit, I will henceforth rule the world!!!

ChessLecture.com Opened in 2005, ChessLecture is the worlds largest video archive of Chess Instructional videos. With more then 2500 videos, our members can research topics on chess to their hearts content. 5 new videos added weekly by our top not proven masters and educators.