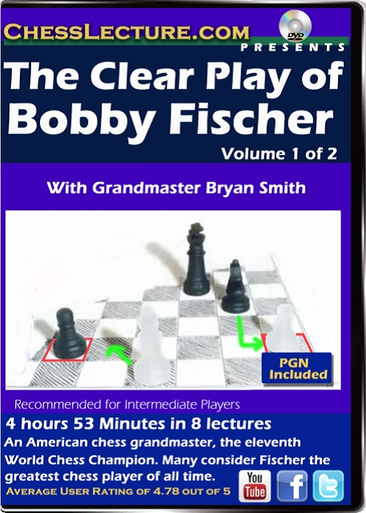 The Clear Play of Bobby Fischer

Robert James "Bobby" Fischer (March 9, 1943 – January 17, 2008) was an American chess grandmaster the eleventh World Chess Champion. Many consider him to be the greatest chess player of all time. In 1972, Fischer captured the World Chess Championship from GM Boris Spassky of the USSR in a match held in Reykjavik, Iceland. The match was publicized as a Cold War confrontation which attracted more worldwide interest than any chess championship before or since.

In this DVD series Bryan examines in depth 8 of Fischer’s amazing matches and explains them in detail.

Content: 4 hours and 52 minutes of instruction and analysis in a series of 8 lectures.

Members of ChessLecture.com rated this series a 4.78 out of 5

Members of ChessLecture.com said:  The best series I have seen on Chess Lecture for some time. Another superb game by Fischer, so deceptively simple and elegant, and expertly explained by Bryan.

GM Bryan Smith grew up in Anchorage, Alaska, and currently splits his time between Novi Sad, Serbia and Philadelphia, Pennsylvania. Some of his accomplishments include first place in the 2008 National Chess Congress, 2009 National Chess Congress, 2010 Philadelphia International, and 2011 Limpedea Cup. He was on the national champion UMBC chess team from 1999 to 2001, and became a GM in 2013. Bryan is the the highest rated player from Alaska and the first ever Grandmaster from Alaska!

ChessLecture.com Opened in 2005 and is the worlds largest video archive of Chess Instructional videos. With more then 3298  videos, our members can research topics on chess to their hearts content. 5 new videos added weekly.