E-DVD Carlsen in the Open 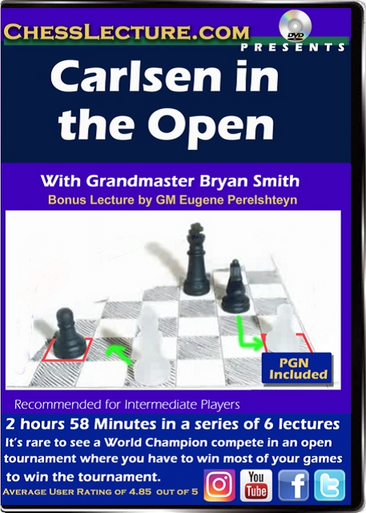 E-DVD Carlsen in the Open

Carlsen in the Open

It’s rare to see a World Champion in an open (Swiss system) tournaments where you have to win most of your matches in order to win the tournament. Nothing less than plus 4 would be successful. Here Carlsen competes in the Isle of Man Open and wins.

Bryan examines some of the games Carlsen played with both colors.

Bonus lecture by GM Eugene Perelshteyn on his own game with Carlsen in the Tournament.

Content: 2 hours and 58 minutes of instruction and analysis in a series of 6 lectures.

Members of ChessLecture.com rated this series a 4.85 out of 5

GM Bryan Smith grew up in Anchorage, Alaska, and currently splits his time between Novi Sad, Serbia and Philadelphia, Pennsylvania. Some of his accomplishments include first place in the 2008 National Chess Congress, 2009 National Chess Congress, 2010 Philadelphia International, and 2011 Limpedea Cup. He was on the national champion UMBC chess team from 1999 to 2001, and became a GM in 2013. Bryan is the highest rated player from Alaska and the first ever Grandmaster from Alaska!

Founded in 2005 ChessLecture.com is the largest professional quality chess instructional video library in the world. Our lectures are created and presented by Grand Masters, International Masters and Life Masters and contain excellent instruction by experienced player educators for the chess enthusiast.

Check our site for the free video of the week!