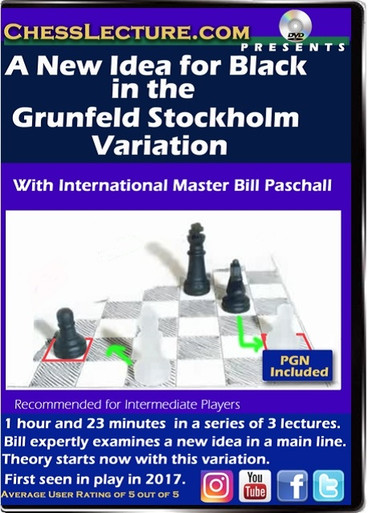 A New Idea for Black in the Grunfeld Stockholm Variation

A fascinating new line with 4...c5 has appeared in recent grandmaster practice in the Stockholm variation of the Grunfeld. This new line is a revolutionary and aggressive idea which creates many new ideas and possibilities for both sides in this important variation.

Members of ChessLecture.com rated this series a 5 out of 5

IM Bill Paschall currently resides in Budapest, Hungary. Bill was the Boylston Chess Club Champion 2002, finished 1st at the Foxwoods Open 2002, Three-Time New England Open Champion, and has defeated more than 20 IGM's in tournament play. Bill has extensive experience training both adults and children privately and in the schools.

ChessLecture.com has over 3350 videos and is the worlds largest chess video library.

Come see our new free video of the week.