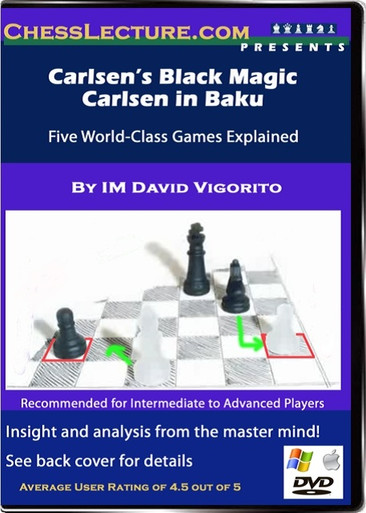 Sven Magnus Øen Carlsen is a Norwegian chess Grandmaster and chess prodigy who is currently the number-one ranked player in the world and the number one ranked player of all time!  David reviews games from two tournaments Carlsen partcipated in before he became the World Champion.

Content: Over 2 hours of chess theory and discussion, with example games, over a series of 5 lectures.

Fans on ChessLecture.com said: Very well prepared lecture! You had the variations down pat and the resulting positions thoroughly analyzed. Well done and looking forward to part 3!

IM David Vigorito is the 2007 Massachusetts Champion and he has also been the state champion of New Hampshire and Nevada. He is currently rated 2479 USCF and is the Champion of the Boylston (Boston) Chess Club. He played in the 2006 U.S. Championship after finishing in a tie for 3rd place at the U.S. Open in Phoenix. David is a successful chess author - his Challenging the Nimzo-Indian has been very well received by critics and players alike, and his recently released second book, Play the Semi-Slav, has been eagerly anticipated. David is an active chess coach for students of all ages and levels.