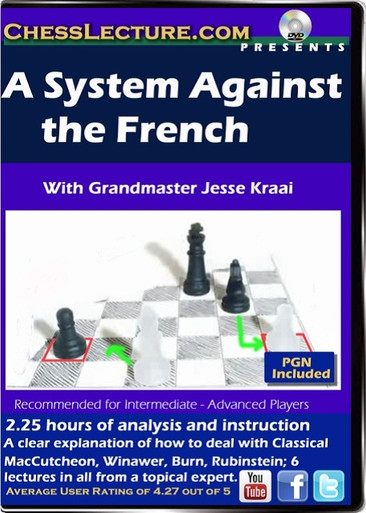 Content: 2.25 hours minutes of instruction and analysis in a series of 6 lectures.

GM Jesse Kraai, an expert on the French defense, demonstrates and gives excellent advice on how to deal with multiple variations of the French including Classical, MacCutcheon, Winawer, Burn and Rubinstein.

Fans on Chesslecture.com said: I have studied Alburt-Dzinzi-Perelshteyn's book and I was having exactly this problem Against the French, with my opponents smashing me in the queenside. Your plan of reaching a better endgame with c3 is very clear.

GM Jesse Kraai resides in Berkeley, California. His most notable chess achievements are winning the Denker Tournament of High School Champions in 1989 and 1990, and competing in the US Championship from 2002-2006. Jesse received his final GM norm at the Foxwoods Open 2007 and has a Ph.D in Philosophy from the University of Heidelberg. Jesse recently released his first book “Lisa, a chess novel”. Jesse is an active chess coach.

Six lectures professionally mastered by the publisher/ New in Box and just released!